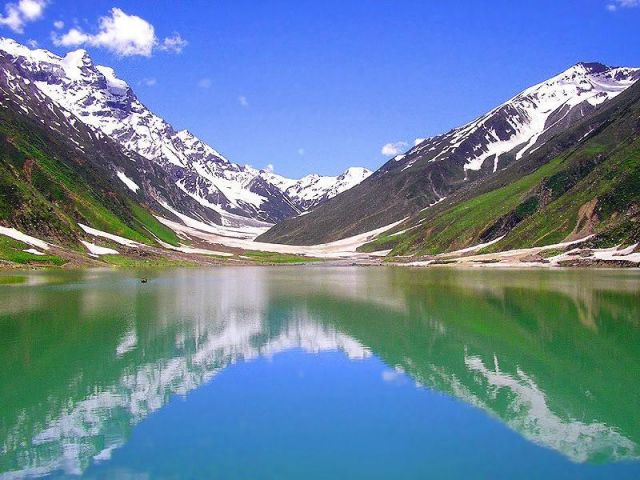 Lake Saiful Muluk is located at the northern end of the Kaghan Valley near Naran. It is in the north east of Mansehra District in the Khyber-Pakhtunkhwa Province, Pakistan. At an altitude of 3,224 m (10,578 feet) above sea level it is amongst one of the highest lakes in Pakistan.

The lake is accessible by a 14 km road from Naran (which is accessible by a road from Mansehra via Balakot and Kaghan) during the summer months. On foot, the trek from Naran to the lake takes about 4-6 hours. The water is clear with a slight green tone. The clarity of the water comes from the multiple glaciers all around the high basin which feed the lake.

The weather here is moderate during day time while the temperature drops to minus degrees at night.

A fairy tale called Saiful Muluk is associated with the lake. It is the story of prince of Persia who fell in love with a fairy princess at the lake. The impact of the lake beauty is of such extent that people believe that fairies come down to lake in full moon.

It looks very beautiful Zeeshan. Have you been there?


Direct link to this image file